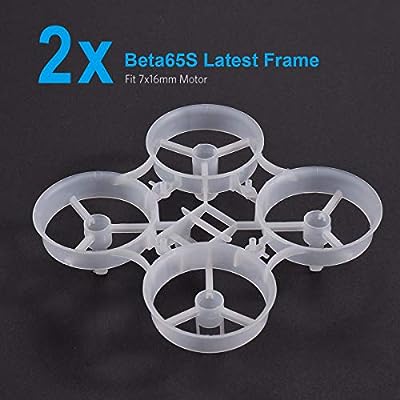 Price: £9.99
As of 2021-03-03 21:48:51 UTC (more info)
Product prices and availability are accurate as of 2021-03-03 21:48:51 UTC and are subject to change. Any price and availability information displayed on https://www.amazon.co.uk/ at the time of purchase will apply to the purchase of this product.
Availability: In Stock
Add to Cart
Buy Now from Amazon
In stock.
Product Information (more info)
CERTAIN CONTENT THAT APPEARS ON THIS SITE COMES FROM AMAZON SERVICES LLC. THIS CONTENT IS PROVIDED 'AS IS' AND IS SUBJECT TO CHANGE OR REMOVAL AT ANY TIME.

This Beta65S V4 version frame was modified based on the suggestion of FPV fans. The frame is made of the same material as the stock Inductrix, but more durable and lighter only 3.6g compared to the stiff V3 version which weights 4.1g. Battery holder location is changed to a bit higher, enabling pilots to do perfect acro manuver. And the 4 mounting columns could fit the whoop FC completely. No need to cut the column on the rear. Best Match of 716 19000KV motors(Not including) give this quad more power and more flight time than your regular 6mm Whoop. Support Struts is strengthened to prevent them from being broken after a harsh crash. The Beta65S V4 frame is far more flexible than the stiff V3 guy. The V4 version has been added the pegs again while missing canopy mounting pegs on V3 frame. So now just place the Tiny Whoop canopy and rip it. Redundant design of the LED holder is removed in the V4 BETA 65S frame.
View our full range of Betafpv products